You are here: Home / Family Fun / Halloween Things to Do in NYC Virtually & In Person
← MTA Launches First Real-Time Digital Subway Map
Early Voting in NYC: What You Need to Know →

Boo. There are plenty of Halloween things to do in NYC before Halloween, and after.

Here is our list of events, both virtual and in-person, both family-friendly and for adults only, including several FREE events and activities, plus Dia de los Muertos (Day of the Dead) FREE events.

Enjoy Halloween on the cheap in New York City.

Tune in to this virtual play of stories inspired by Edgar Allan Poe – who lived and worked for many years in what is now called Poe Cottage in the Bronx.

This one-man play re-imagines themes from several Poe stories from the point of view of a man named Gene, who introduces us to his sweetheart Lenora, a collection of kooky neighbors and their various creatively named pets, and the disturbing cycle of violence threatening to envelope each of them, all while tuning out the mysterious thumping sound haunting him.

A Tell-Tale Heart performances are today, Oct. 22, through Sunday, Oct.25,

The Thursday, Oct. 22 performance is a live reading, and the remaining evenings are the recording of that first night.

Read a review of the play on Broadway World.

Full Disclosure: Alec Silberblatt is a relative of mine. But that has nothing to do with the impressive talent of this young man.

For More Free and Cheap Things to Do 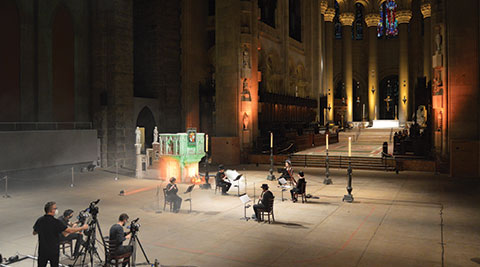 All Hallows’ Eve: NY Phil at the Cathedral

The New York Philharmonic will partner with the Cathedral of St. John the Divine this Halloween to present a FREE streamed performance of classically spooky compositions by Saint-Saëns and others, recorded in the Cathedral.

In place of an in-person family day event this year, The American Museum of Natural History has launched an online Halloween contest, for a chance to win four tickets to the Museum, with entry to special exhibitions T. rex: The Ultimate Predator and The Nature of Color.

Any age can participate, including pets. It’s easy to participate: Just share a picture of your finest Halloween costume and tag it @amnh on Instagram and Twitter,

Costumes will be judged on originality, detail, creative use of materials, and (most importantly) theme, with a special focus on the best natural history-inspired costumes

Halloween Installation at the Winter Garden

For one week only, you’re invited to come face to face with this strange new life form suspended in the palms in the Winter Garden glass atrium, where you can turn yourself into a monster with a specially designed AR filter on Instagram.

Freebies for your foto –
Snap a selfie with or a photo of the Monster sculpture in the Winter Garden and post it to social media tagging @BFPLNY to redeem a goodie bag full of exciting treats from the concierge desk, while supplies last.  Treats include a BFPL coloring book, sweets, offers from BFPL’s shops, a $10 Hudson Eats gift card, and more!

Just because trick-or-treating will be a little more solitary this year doesn’t mean you have to let jack-o-lantern season pass you by. To celebrate autumn, take a trip to unofficial Lower Manhattan backyard Governors Island, where its annual Pumpkin Point returns on Saturday, Oct, 24, through Nov. 1.

The patch will feature thousands of artfully arranged pumpkins paired with fall-themed decorations. Visitors are invited to roam the patch, provided they are masked and keep a safe distance of at least six feet from the other pumpkinheads.

Best of all, a visit nets you a free pumpkin, which you can carve into or draw on at home or simply use as a festive doorstop.

Join Manhattan Community Board 2 and NYU for the 30th year of FREE family-friendly Halloween fun.

For the first time ever, it is a virtual Children’s Halloween Parade, with musical performances, a costume contest, a downloadable activity book and more.

You’re invited to share a photo of yourself and your family dressed up in your favorite costume. ​The virtual parade will feature a slideshow of submitted costumes, and prizes for the winners.

Best of all, delight in wild, wacky, and adorable costumes from near and far—and have the opportunity to win prizes with your own entry at the annual costume contest.

Day of the Dead Virtual Events

Celebrate this event all weekend with these FREE virtual events from the National Museum of the American Indian.

Learn about monarch butterflies from cultural and scientific experts, and enjoy the music of GRAMMY-winning East L.A. band Quetzal.

Join NMAI for a virtual celebration of Día de los Muertos! Learn the basics of the day from the museum’s folklorist, make paper marigold flowers, explore the holiday’s rich culinary heritage, and post messages in memory of your loved ones on a virtual ofrenda.

Put on your spookiest costume and join Brookfield Place online for a family-friendly FREE digital Halloween celebration that includes a kid’s cooking class.
Here’s what to expect:

Sonia De Los Santos: Born with a smile on her face (that’s what her mom says) in Monterrey, Mexico, and in 2007 started touring the world, singing in English and Spanish, playing guitar and jarana and lighting up the stage with Grammy Award winning group Dan Zanes And Friends before working on solo family music albums and being nominated in 2019 for a Latin Grammy.

The Mario Show with Mario the Maker Magician: As seen on Sesame Street, Universal Kids, and live on tour with David Blaine, Mario the Maker Magician is a (normally) touring performer who has been creating online content in the form of his hit virtual show, The Mario Show, during this time away from the road. David Blaine calls him “the best kids magician in the world!!” Tune in and experience it for yourself!

Be the first to know about NYC free and cheap events, discounts and deals by signing up for our FREE enewsletter.